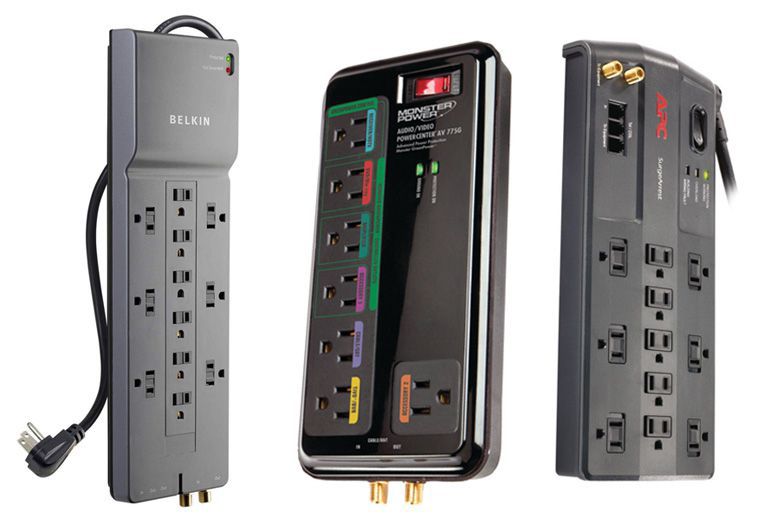 Whether you’re just looking to add more outlets, or want to add a layer of protection between your gear and the outside world, you’ll eventually want to buy a surge protector.

With an incredible range of prices and features, not to mention a barrage of questionable marketing promises, it’s hard to figure out what’s worth the money, and what’s nonsense.

To help you sort through it all, here are nine things you should know about surge protectors.

For a little background, check out what makes a good surge protector. This article is the spiritual successor to that piece, though we’ll cover some similar ground.

Power strips and surge protectors (also called surge suppressors) are different. Typically, power strips are cheap, multi-outlet products that are merely an expansion of a wall outlet. These usually have a circuit breaker of some sort, but most don’t offer any real “protection” from electrical issues. Some might have the barest level of protection, but they’re all pretty much just like plugging into the wall direct.

Surge protectors offer some level of protection against power spikes. How much and how well varies considerably.

Surge protectors offer protection in amounts called joules. Think of this like a reservoir of protection. If a product has 1,000 joules of protection, that means it can take ten 100 joule hits, or one 1,000 joule hit. Generally, the more joules the better.

How do you know how many joules a protectors has left, or if the rating is even accurate? Well, you don’t. The Wirecutter did a massive test on surge protectors, essentially blowing them up to see how well they worked, to see if they could answer this question.

Some surge protectors offer a warranty (up to a certain amount) on the gear connected to the protector. For example, in the US, one Belkin model has a $300,000 Connected Equipment Warranty, and states: “If your electronic equipment is damaged by a surge, spike, or lightning strike while properly connected to this power strip, we will repair or replace it, up to $300,000.”

You’ll probably never need it, but it certainly doesn’t hurt to have it. Belkin has similar warranties in effect for other products, but they vary by region.

There are a number of products on the market that claim to “condition” the power from the wall, promising improved performance in your gear. Here’s the dirty little secret: your gear already does this. All electronics have a power supply that takes the incoming wall current (110v in the US), filters it for noise, and converts it into whatever the device needs. Almost nothing actually runs on 110 volts (or alternating current, for that matter), so unless you’ve got some really wacky (or cheap) gear, and live in an area with bizarrely inadequate power, a power conditioner isn’t something you need.

5. Always get more outlets than you need.

You’re always going to need more outlets. You’ll undoubtedly add more gear, without necessarily getting rid of your current gear. I’m not saying that if you think you need 4 outlets get a 12, but a 6 is probably a good investment.

6. Power spikes can come over any wire.

If you want total protection, consider that phone and cable lines can carry power spikes too. Some surge protectors have connectors for these as well.

Many surge protectors come with USB connections, so you can charge your mobile devices. Handy, for sure, but check what the output amp rating is. Generally, this is either 1 or 2 amps (often labeled 1A or 2A). This is how much flow you can get through the pipe, so to speak. For a mobile phone, 1 amp is enough, but for a tablet, you’ll want 2 amps for quicker charging.

8. Get a portable power strip.

While not offering much protection, a portable power strip might prevent marital friction, and/or invoke bliss from travel companions. Most hotels and hostels have few accessible outlets, yet everyone has multiple devices that need recharging. Most portable power strips add two to three additional outlets, plus offer direct USB charging (see number 7!).

Remember the joule rating we discussed earlier? Well, it means that over time, a surge protector is going to wear out. Some will give you a warning when they do. Many won’t. If you know you’ve had a serious electrical event (like lighting blew out a transformer down the street), it’s probably worth replacing your surge protector just in case.

There really is no reason not to get a surge protector. How much you need it will vary. If you live in an area with lots of thunderstorms, your gear is probably more likely to experience power surges. Even if you live in the desert, your A/C or refrigerator could kick power spikes back down the lines to your A/V gear.

Since most surge protectors are cheap, they’re worth getting just in case.